The newest drop from Molded Innovations boasts a completely new style of LED Bar, the Boost LED Bar features three styled LED bars available in a smoked or clear white style on a gloss black bezel along with a sequential turn signal atop the bars! This new horizontal LED bar style has been becoming very popular with numerous headlights on the market utilizing this style. Let's face it the fog light surround area of the 2018+ WRX / STI is pretty plain, the boost LED bars glossy black surround complements any color Subaru nicely, the super bright LED bars are visible at any point in the day and really stand out at night! Last but not least the sequential turn signal is a clean way to add a bit of extra functionality and style to your front end!

When we received our first test kit we noticed a glaring issue, there was no wiring? They simply included 6 T taps, and that was it. While T Taps are not uncommon in the automotive lighting industry they posed a few glaring issues to the ease of install, reliability and overall safety of this kit. Without any plug and play wiring, customers would be left to T Tap into three positions on your OEM lighting harness. When we first looked at the T Tap locations we noticed a few things, firstly the wires they were requesting customers tap into were just in bad locations, limited excess wire and were crucial to the OEM lights function. In short, the install would be tedious, to say the least and if done wrong could cause failure to arguably one of the most important components of your car.. That's where we stepped in! Subimods has always had a background in wiring and with the ability to develop and produce a proper wiring harness quickly we worked with Molded Innovations to release a Plug and Play wiring kit specifically for these Boost LED Bars. This wiring harness allows the Boost LED bars to function as close to fog lights as possible, this ensured that the OEM wiring was not modified in any way and that the LED bars were functional, safe and easy to install.

How do they work?

This is a very important section as the Molded Innovations wiring takes the signal to illuminate the DRL bar from the engine bay fuse box, specifically the factory DRL circuit via an add a fuse. This means that your DRL will be illuminated any time that position has power which essentially is any time the ignition is keyed on. This makes for a simple "set it and forget" installation and ensures that the function remains intact regardless of outside factors. The biggest pro of this wiring design is that it is 100% reversable and universal across STI models and WRX models without fog lights!

Why do I need a separate blinker harness?

Once we completed the power harnesses we noticed another point, the blinker connector still needed to be T tapped. This posed a similar set of issues as the STI models and Limited WRX models do not have the blinker in the fog light bezel, it is wrapped in with the headlight wiring harness. As a result, we made a plug and play adapter to allow you to simply connect three connectors and tap into your blinker without making a irreversible change!

I bought my bezels from another vendor, can I buy your wiring?

In short, unfortunately not. The reason is Molded Innovations does not just simply include wiring, they go through the process of modifying the bezels as well to add the weatherproof seal, connectors and heat shrink so that you the entire product becomes plug and play.

Wiring harness makes it easy to install and the video helps. Only 2 issues I had was when you hook up the factory turn signal bulb you have to understand that the bulb is a standard NON-LED bulb and the LED turn signal is LED. Polarity does not matter on the Bulb but it does for the LED turn signal. Just had to flip the connector to the stock bulb location around and it worked. Second issue was some minor flacking of the gloss black paint around the edge. I could live with it. Overall they look really nice and I got the smoked which makes it so you only notice them when they are on.

We appreciate your positive review of the Molded Innovations Sequential Boost LED Bezel Kit provide an amazing look! The plug and play wiring harness makes installation simple! They really have a great style over the OEM fog light design!

Great looking product. Easy install, even without written instructions (video on site). The wiring harnesses made install a snap.

The Molded Innovations Sequential Boost LED Bezel Kit change the entire look of your WRX/STI! The wiring harness makes installation a breeze! Thank you for the 5 Stars!

Love these. I am not a big fan of wiring but when I saw that Subimods had a kit with extra wiring I was 100% down. I can't get a solid answer out of other vendors who sell a similar product how theirs installs but Id kind of assume its not as polished as this kit given the price difference.

Really happy with them and the support I got..

Thank you for the 5 Star Review! It is fantastic to hear that Subimods support was able to help with your situation! Always remember Subimods customer support is available to answer any of your questions whether it has to do with installation, orders, or anything else Subaru related. The Molded Innovations Sequential Boost LED Bezel's look amazing! Subimods has designed a wiring harness to be plug and play which makes installation much easier!

Thank you for the Review! Please contact Subimods via email to support@subimods.com or call us at 860-291-0015 so that we can best help you with your specific situation. Our customer support can help with installation and troubleshooting! 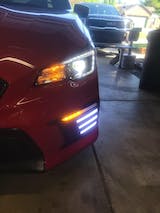 The Molded Innovations Sequential Boost LED Bezels and Wiring Kit are a huge improvement over the stock foglight bezels! Subimods designed the wiring harness for plug and play ability making these and any easy install for a super unique look! Thank you for the 5 Stars and added pic!

Added to your cart: